Hailey Bieber, who suffered a mini-stroke earlier this year, is opening up about another health complication.

Bieber, 26, shared on Instagram Monday that she has a cyst the size of an apple on her ovary.

"It's painful and achey [sic] and makes me feel nauseous and bloated and crampy and emotional," Bieber wrote over a photo of herself, posted on her Instagram story.

Bieber also wrote that she has had a cyst on her ovary before, saying, "It's never fun."

She also said she does not have endometriosis or polycystic ovary syndrome (PCOS), two conditions that can cause ovarian cysts. 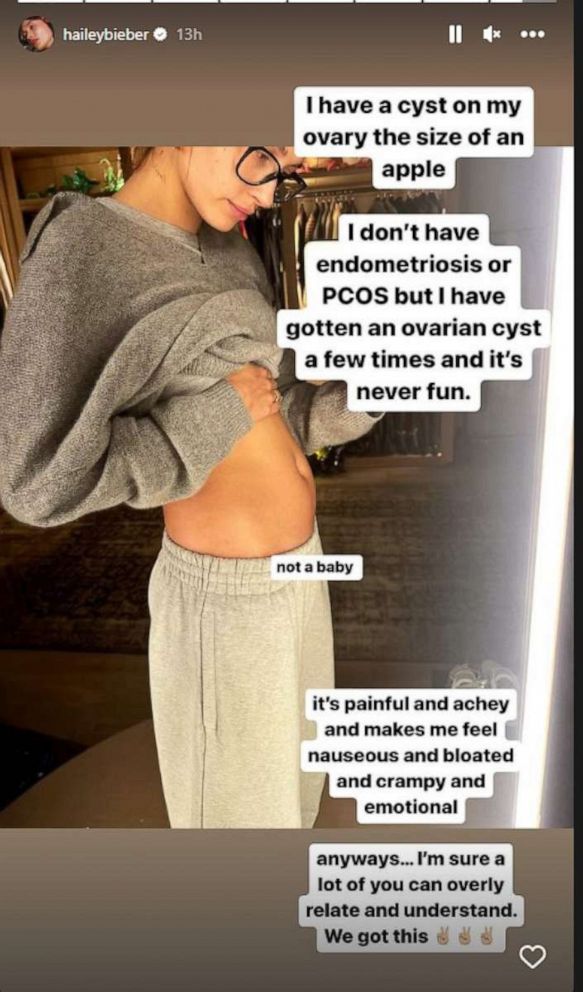 Hailey Bieber/Instagram
Hailey Bieber, 26, shared on Instagram that she has a cyst on her ovary.

The Rhode Skin founder did not share any additional information about the cyst but said she thought other women could relate to what she's going through, writing, "We got this," alongside three peace sign emojis.

According to the U.S. Office on Women's Health, women form at least one cyst every month as part of the normal ovulation cycle, while around 8% of premenopausal women develop cysts large enough to need treatment.

What to know about ovarian cysts

An ovarian cyst is a fluid-filled sac that forms in the ovaries.

Cysts are formed every single month in the ovulation process, according to the Office on Women's Health. Most of the cysts are what gynecologists call "functional cysts" and do not cause specific symptoms.

Any cysts that develop after menopause are not normal and should be evaluated by a doctor, as they are more likely to be cancerous, according to the U.S. Office on Women's Health.

Symptomatic ovarian cysts can be caused by hormonal problems, endometriosis, pregnancy and severe pelvic infections, according to the Office on Women's Health.

If an ovarian cyst does cause symptoms, they may include bloating, pressure or pain near where the cyst is located.

Symptoms for a ruptured ovarian cyst may include dizziness, nausea, vomiting and intense pelvic or abdominal pain on the side of the body where the cyst is located. Ruptured ovarian cysts can mimics symptoms of appendicitis, ovarian torsion and ectopic pregnancies that are medical emergencies. The Office on Women’s Health recommend seeking immediate medical attention if a woman is having sharp, sudden abdominal pain especially if accompanied by vomiting, fever, dizziness, weakness or rapid breathing.

The majority of ovarian cysts resolve on their own and most are benign, according to Dr. Jennifer Ashton, ABC News chief medical correspondent and a board-certified OB-GYN.

If a cyst is small, the doctor will implement what Ashton calls "watchful waiting" to see if the cyst resolves itself on its own.

Treatment for a larger ovarian cyst typically begins with a sonogram or ultrasound so the doctor can look for features that would indicate the cyst is benign. If there is not suspicion, the doctor will likely have the patient come back in four to six weeks for another checkup, according to Ashton.

If there is a suspicion of cancer, a doctor will likely order further testing.

Problematic cysts can be removed through surgery. The National Institutes of Health estimates that 5% to 10% of women have surgery to remove an ovarian cyst.

Women with frequent or painful cysts may be advised by their doctor to take over-the-counter pain medication or hormonal birth control, according to the Office on Women's Health.