"GMA" contributor Zibby Owens is the host of the daily, award-winning podcast "Moms Don't Have Time to Read Books." She is the founder and CEO of Zibby Media, which includes a publishing company, Zibby Books; an online magazine, Zibby Mag; a podcast network, Zibby Audio, and the all-new Zibby Classes education platform. Her new bookstore in Santa Monica, California, opens next month. Follow her @zibbyowens.

Happy New Year! This year is going to be huge. So many fabulous books are coming out in 2023. There's hope between the lines. Colorful, happy covers. Funny, inspiring, sad, poignant, escapist, thought-provoking stories. It's going to be a wild ride. 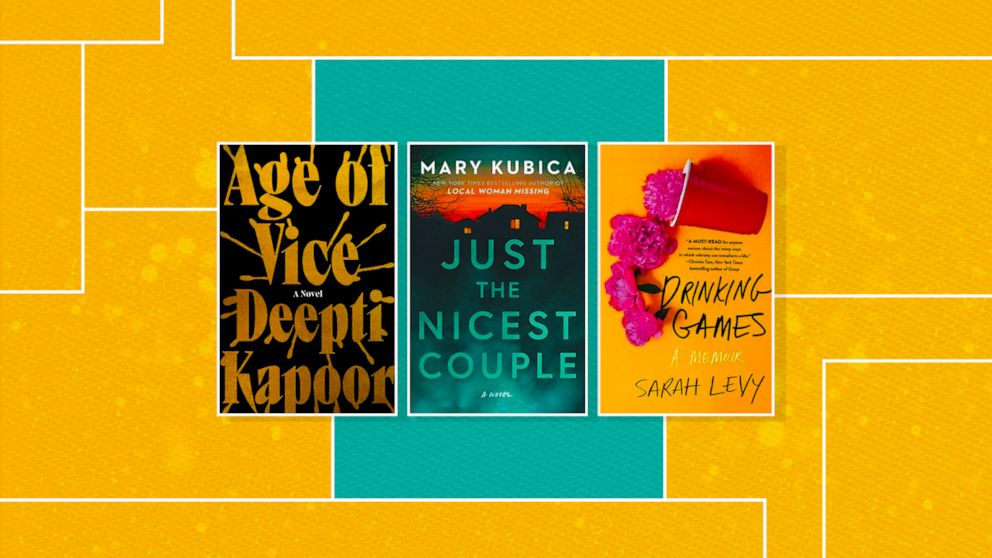 These 15 books will start the year in style and set the tone for all the great books to come. So enjoy! Can you feel the excitement? I can. And if you want to know the top five books I'm most excited about in 2023, watch my live appearance from New Year's Day here. Onward!

"Age of Vice" by Deepti Kapoor

Everyone is talking about "Age of Vice." This unexpected, addictive page-turner follows a wealthy Indian family, the Wadias, and the outsiders who are drawn into their orbit. Extravagant parties, business deals, corruption, violence and political intrigue set the stage for three intersecting lives: a keen-eyed servant, a playboy heir and a journalist. Dubbed "equal parts crime thriller and family drama," this hefty book will land with a thud on bedside tables around the world, sure to keep readers awake and engaged.

Set in the uber-luxurious hamlet of Palm Beach, Florida, "Reef Road" follows one woman whose husband and children vanish from their gorgeous waterfront home during the pandemic. Does that woman writer who lives nearby have anything to do with it? And why did a human hand wash up on the beach? Who is the unexpected visitor, really? You'll feel the salt air coarse through your hair as you grip the book tighter, eager to find out what could have happened to this panicked mom in Deborah Goodrich Royce's third novel. At least, I did!

OK, no one should be blacking out drunk as often and to such extremes as Sarah Levy did in her teens and 20s, a quirk of her brain perhaps caused by her first binge-drinking experience. When Sarah decides to quit drinking altogether and get on with her life, readers will breathe a sigh of relief and root for her as she stumbles through, newly sober, on this dry January.

Allegra Goodman is the author of six novels but still went through periods of self-doubt when writing "Sam," loosely based on her fourth child (her first daughter), a girl who wouldn't sit still and climbed the walls -- literally. Sam grew up dealing with issues like a difficult father, loss, class conflict, addiction and more. As she was writing "Sam," Allegra worried if the plot was enough and then told herself, "The book is about the opening of (Sam's) heart and mind. Isn't that enough?" Yes, Allegra. It was more than enough. With short chapters, a young yet maturing point of view, a lot of dialogue, and light text but deep character analysis, Sam is original, full of heart, and makes you think and feel. A coming-of-age tale for all ages.

Everyone is going to make the same joke: "Really Good, Actually" is... really good, actually. I had to say it. Because it's true! This debut novel is a prime example of how a storyteller's voice can pull you right in and keep you clinging to every sentence. It's how a train-of-thought style can let you into someone else's heartbreak so that you not only see the sadness but the hilarity that ensues behind it. Monica's own marriage ended after a year and a half in her late 20s when many of her friends weren't even in relationships yet. Instead of staying in bed, mourning the heartbreak, she decided to find the humor in every dark moment, which, as a screenwriter for shows like "Schitt's Creek" and "Workin' Moms," must have come naturally to her. This is a book I would/will give to my closest girlfriends and say, "You have to read this."

"The Survivalists" by Kashana Cauley

Kashana Cauley dedicated "The Survivalists" to "everyone who's ever fired me." That starts her witty, incisive look at work politics, Blackness, relationships, gun ownership, Hurricane Sandy, parent loss and more. When Aretha, a super-ambitious lawyer, falls in love with Aaron, a coffee entrepreneur, she discovers his hidden world of... wait for it... arms sales. Kashana writes for the Fox comedy "The Great North" and is a contributing opinion writer for The New York Times. After reading her novel, you'll want to inhale everything she writes. With lines to make you snort like, "God, you look like a stale bundle of pizza dough, she didn't tell him when he'd taken off all his clothes...," this smart, funny novel will stay with you.

"The Dream Builders" by Oindrila Mukherjee

This novel set in India reminds me of a Robert Altman movie. We get snippets of each character's life in their own dedicated chapters, only to skip to a peripheral character's point of view in the next. A wealthy yet miserable child-longing, beautiful young wife gives her old friend, Maneka, who is visiting town from America after the sudden loss of her mother, a facial with a bonus massage. We spend a chapter with each of them, plus the masseuse, then on to Maneka's dad, his maid and so on, alternating among 10 different voices like a linked collection of stories all circling the same neighborhood. The underlying plot centers around a rapidly growing part of India, the abandoned real estate projects that destroy some families' lives, and the Trump building being built that promises hope and yet destruction. You'll want more of every single character.

"The Love You Save: A Memoir" by Goldie Taylor

Human rights activist, journalist and cable news political analyst Goldie Taylor writes from her own perspective as a child when her Black family moved away from the violence in St. Louis to a white Missouri suburb called St. Ann. While her time there started peacefully enough -- playing with her friend Debbie's dolls, earning money for a new bike and having dinners with Debbie's family -- everything was about to change. The act of violence that occurred, and her mother's reaction to it, shaped Goldie's life, fractured her family and taught her how to survive literally everything. Painful and inspiring, Goldie's memoir is important and unique.

Two middle-aged sisters live together for the first time in decades after their respective marriages fail. Together, their idiosyncrasies come to the forefront as they navigate life, especially when a curious couple moves upstairs. Shadowing their everyday life is the loss of their sister as a child, the circumstances that led their mother to virtually ignore them and how that shaped their emotional lives going forward. Most interestingly, bestselling author Laura Zigman shares that she had a similar childhood loss of her special needs sister. This is her most personal novel yet and adds a layer of meaning to all her work to date. Engaging, funny, sad and very real, this look at family love and loss is wonderful. Just like Laura.

London-based Maddie is her dad's primary caretaker as he copes with advanced Parkinson's disease; her mother is back in Ghana. Maddie is tired of "always being the only Black person in every meeting" at her job. When her mom finally returns, Maddie is free to live the life she wants, which she embraces with abandon until tragedy strikes and has her return home. Launching with much fanfare, this debut novel is sure to be a huge hit.

"The House of Wolves" by Mike Lupica and James Patterson

What do you get when you pair two successful, bestselling authors with fantastic senses of humor and a love of sports? You get an unforgettable, cinematic family story. As the children of a media company CEO vie for control of their late father's newspaper and football team, drama unspools in the alternating perspective chapters. The best part is that these two mega-authors, James Patterson and Mike Lupica, have co-created a fabulous, strong female protagonist, Jenny Wolf, a daughter who knows how to run things and isn't afraid to speak her mind -- even when her brothers and others resolve to bring her down. Jenny Wolf is a strong hero for 2023.

New York Times bestselling author Mary Kubica is back in "Just the Nicest Couple," an inside look at two marriages that intersect when one husband goes missing. Secrets, lies, suspicions and friendship intermingle in this mind-bending tale that "White Lotus" fans will particularly enjoy.

"The Hunter" by Jennifer Herrera

Former NYPD detective Leigh O'Donnell returns home to Cooper Falls, Ohio, the small town where she grew up and where her brother and uncles still live, with her young daughter in tow. When she hears about three recent drownings in town, she resolves to solve the crimes -- but what rises to the surface is far more complicated than she originally suspected. A debut novel, "The Hunter" will bring thriller fans the immersive read they're looking for.

A coming-of-age novel by Slate editor Dan Kois, "Vintage Contemporaries" follows a literary agent's assistant, Em, as she lands in New York in 1991 and becomes enmeshed in the lives of a theater director and a novelist. Fast forward to 2004 when Em has become a successful book editor and mom, when she reunites -- in a way -- with both women, one dead and one alive. Smart, sharp and with a twist of inside publishing, this novel is a gem.

"The Mitford Affair" by Marie Benedict

Before Harry and Meghan were the six Mitford sisters, a glamorous, powerful family of beautiful women. Diana, the crown jewel of them all, decides to leave her aristocratic, perfect husband to take up with a married man who has no intention of leaving his wife. Her younger, ugly duckling sister takes us residence with her, and the two of them end up on stage with Hitler as he rises to power in Germany. Their sister, the author Nancy Mitford, watches what's going on from afar until she can't stay quiet any longer. In a "Downton Abbey" meets "The Crown" epic, beautiful scale comes this unforgettable commentary on British society, movements that may seem innocent but end up being grotesquely toxic, and the role of women thrust into the center of it all.

Up Next in living