An Alaska mom of two is opening up about what she says is the truth about Thanksgiving -- or "Truthsgiving" -- and joining a growing number of outspoken Indigenous community members who want others to know there's more to the Thanksgiving story of 1621 than many American schoolchildren are taught.

Kelsey Ciugun Wallace, a TikTok content creator, mom of two, and the development and communications director at the Alaska Native Heritage Center, said she was inspired to post about "Truthsgiving" after talking to her daughter Cingarkaq last year when she came home from kindergarten with a homework assignment about Thanksgiving.

"I just remember sitting there and looking at the curriculum and realizing that it hadn't changed from when I was in school," Wallace, who is an Orutsararmiut Native Council member, recalled to "Good Morning America," saying it "felt wrong" to go along with the "happy feast" storyline. 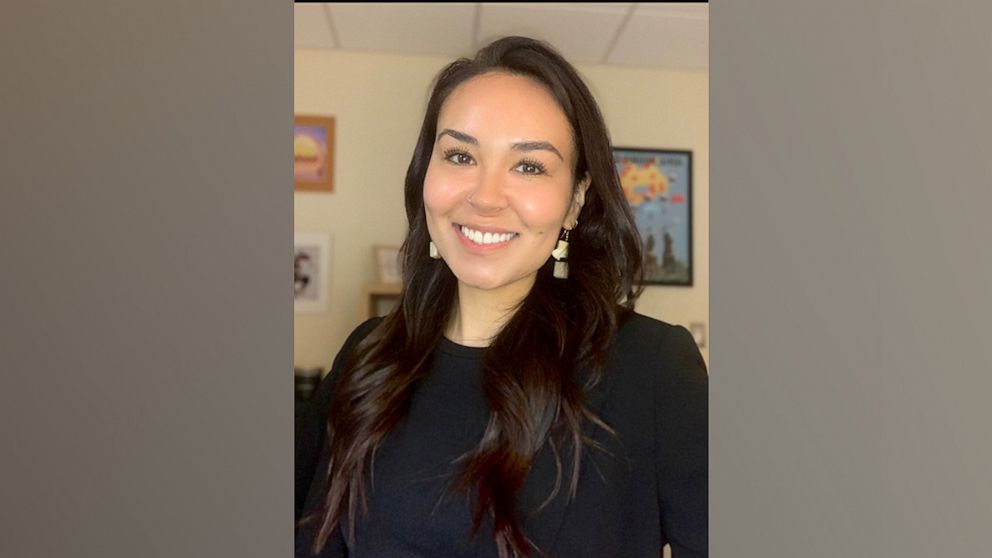 Wallace posted a TikTok video ahead of Thanksgiving last year -- reshared on her TikTok account over the weekend -- in which she outlined five things she wants people to do on "Truthsgiving," rather than simply hosting a Thanksgiving feast:

"This year marks the 400th year since the lost Pilgrims stumbled onto Native lands. I’m cutting ties w/ the 'what are you thankful for' narrative this year," she wrote in the caption.

The video has since garnered thousands of likes and over 10,000 views.

@kelseyciugun This year marks the 400th year since the lost Pilgrims stumbled onto Native lands. I'm cutting ties w/ the "what are you thankful for" narrative this year. #nativelands #truthsgiving #indigenous ♬ original sound - Erica_momfriend

A year later, Wallace has added to her list, saying she wants TikTokers to also "learn from Indigenous culture bearers, from educators, from Elders and from Indigenous youth."

When she talked to her daughter, Wallace said that "even though it was a little bit uncomfortable, she was able to still, at 5 years old, grasp the concept of the true history about Thanksgiving," and when her daughter went to school and told her peers and teacher, they were open to hearing a broader story, one that Indigenous people are still uncovering and sharing today.

"A lot of people don't get that historical context"

The Thanksgiving story of 1621 that centers on a big feast between the Pilgrims and the Wampanoag tribes has been widely accepted for generations. As the story goes in school curriculums throughout the U.S., the Pilgrims fled religious persecution in England and arrived at Plymouth Rock, where they would end up building a new colony from the ground up in what is now present-day Massachusetts.

The story is often presented in a positive light and as a major turning point in colonial America. 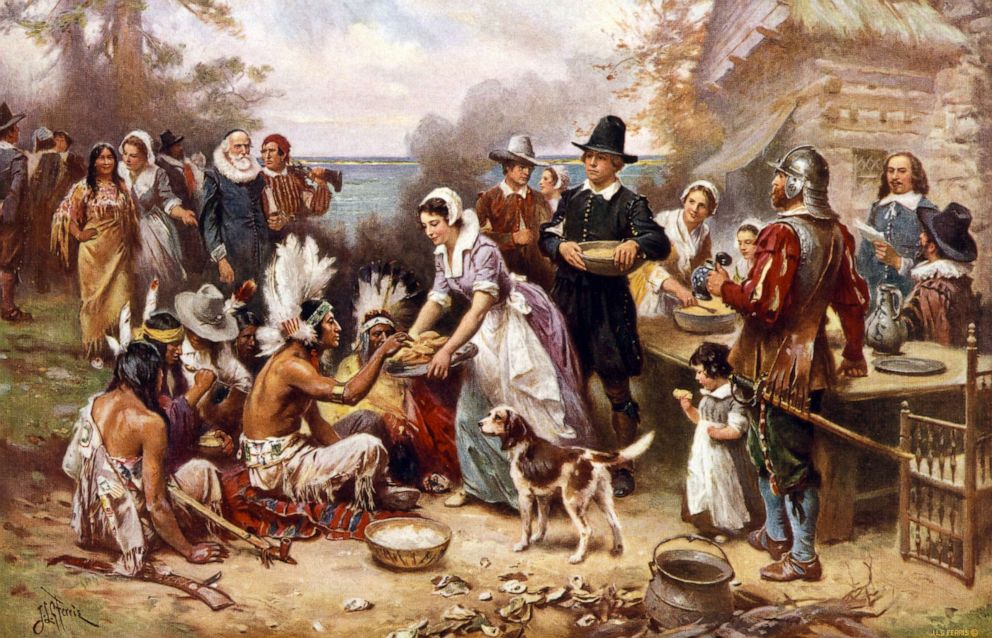 "The prevailing narrative of the first Thanksgiving is often portrayed as a friendly harvest where Pilgrims -- really we should say separatists -- and generic, nameless Indians came together to eat and give thanks, but in reality, the assembly of the Wampanoag peoples, which is a native nation based in Massachusetts, and those English settlers in 1621, may have been more about political alliances and diplomacy and a pursuit of peace," Renée Gokey, a teacher services coordinator at the Smithsonian Institution's National Museum of the American Indian, told "GMA."

All of this, Gokey said, came against the backdrop of plagues and multiple wars.

"The important thing to note … is that a lot of people don't get that historical context of before this event and they say, 'Oh, the English used the seeds and just watched them, showed them how to plant and things.' They don't say that they actually ransacked these somewhat empty villages to take the seeds from people who died," Gokey continued, noting that the Wampanoag were victims of infectious diseases the English had brought with them. 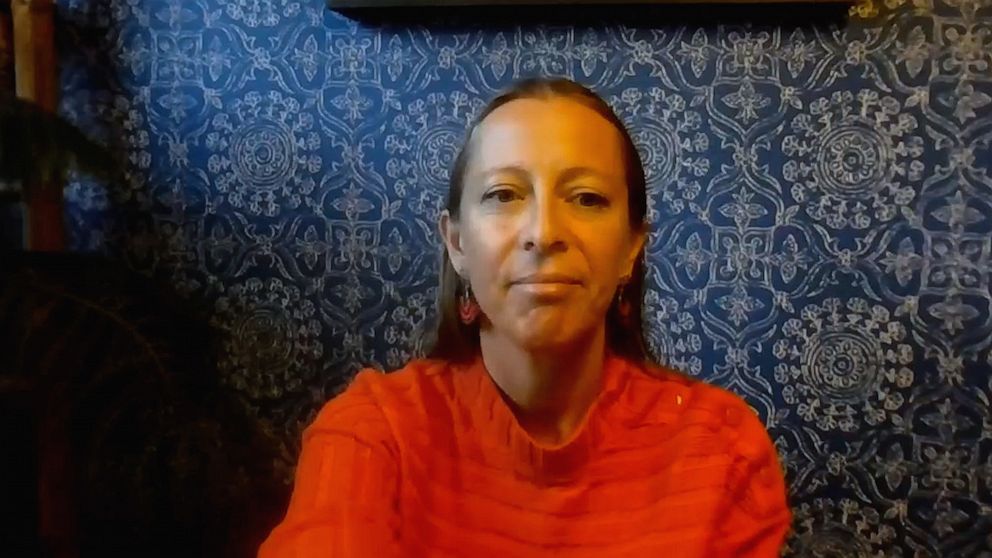 ABC News
Renée Gokey is a teacher services coordinator at the Smithsonian Institution's National Museum of the American Indian in Washington, D.C. Gokey is a citizen of the Eastern Shawnee Tribe.

Part of this is why Jean-Luc Pierite, president of the board of directors for the North American Indian Center of Boston, plans on attending the United American Indians of New England's National Day of Mourning protest this Thursday, which has been held on Thanksgiving since 1970.

"What also happened during those stretches of time was that there were wars between the settlers and other Indigenous nations," Pierite, a member of the Tunica-Biloxi Tribe of Louisiana, told "GMA." "You have this history of thanksgivings being called for victories in wars over Indigenous peoples, so it wasn't just a coming together with everybody eating a turkey … we have to bring those instances into focus as well when we're talking about confronting the realities of Thanksgiving within the United States." 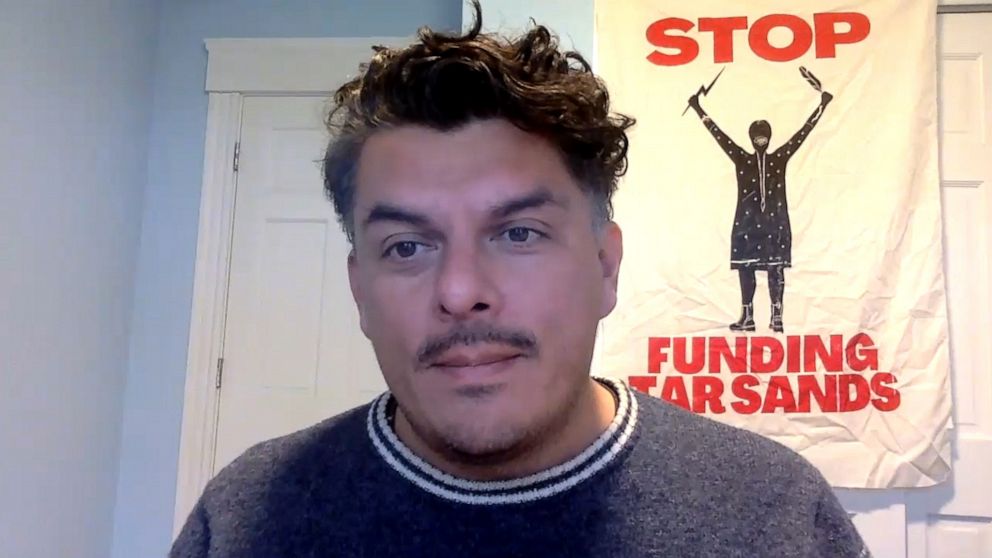 ABC News
Jean-Luc Pierite is the president of the board of directors for the North American Indian Center of Boston. Pierite is a member of the Tunica-Biloxi Tribe of Louisiana.

"It's an action that promotes all of those perspectives from the front lines, of calls to justice from Indigenous peoples," Pierite said, noting that the protest marches to and from Plymouth Rock. "It's like our way of … confronting that ideology that requires the mythology of romanticizing colonialism and confronting that with 'well, this is what's happened to Indigenous peoples, this is what is happening.' And being here and doing this procession, this is how we're going to confront all of this stuff, going to the roots of the history itself."

Other popularized stories, Inidgenous storytellers say, are missing key details, simplifying the story of people like Tisquantum, commonly known as Squanto, when his story is likely more complex than a local Native who wanted to help foreigners.

"People don't know the whole story of Squanto. They just hear, 'Oh, Squanto was the friendly Indian who taught the Pilgrims how to live in the New World and he was the hero,' " Paula Peters, a Mashpee Wampanoag writer who also wrote the introduction to Plymouth colony governor William Bradford's "Of Plimoth Plantation" journal, told "GMA."

"Children will ask, 'Well, wait a second, how did he learn how to speak English?' … And the answer to that is very telling." 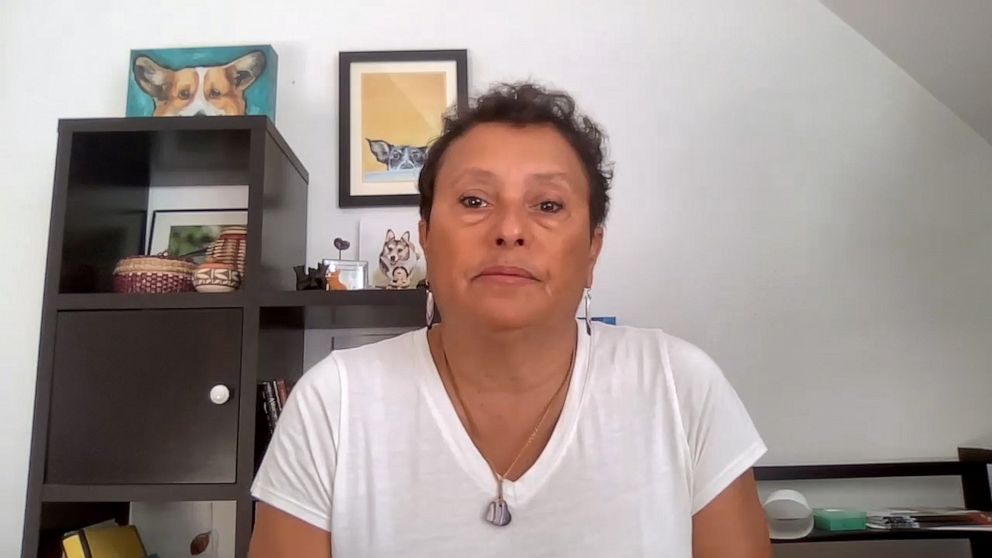 ABC News
Paula Peters is a writer and a citizen of the Mashpee Wampanoag Tribe.

As Peters tells it, Squanto was one of many men kidnapped in 1614 and sold into slavery in Europe.

"He ended up living in the home of an English gentleman for about six years until he was able to convince a explorer to bring him back, presumably as an interpreter, as a guide," she continued. "So when he returned, he came home to find that all of his family had either been killed in the plague or fled from the village. That village becomes the village of Plymouth. And so that really makes it a very critical backstory to the settlement of the colony."

From Peters' viewpoint, the legend behind Thanksgiving "spreads a lot of misinformation." "The Wampanoag were never invited for a feast for the harvest of the Pilgrims," she said. "[The Pilgrims] were having their own harvest gathering and at the time, one of the things that they would do at a time of celebration or gathering would be to have a musket drill. And they fired off their muskets and that got the attention of the Wampanoag, who deemed it really as a threat."

"It's not an event that it's portrayed to be. It was more of an accidental feasting," Peters added.

Overall, Peters said, "The Wampanoag story and the Indigenous story for all of America really gets marginalized because it's not a pretty story. In having history retold really by the colonizer, they're going to leave out the parts that aren't fun and that's basically what happened."

"A time to remember and honor the sacrifices of our ancestors"

Today, Peters sees Thanksgiving as an opportunity to advocate for Indigenous communities.

"For indigenous people, for many of us, it's also a time to remember and honor the sacrifices of our ancestors and also to bring to light some of the past injustices and the injustices that still continue to this day," Peters said, pointing out issues such as the many cases of missing and murdered Indigenous women and boarding school abuses of Indigenous students throughout history.

Gokey, a member of the Eastern Shawnee tribe, said that, to her, it's important to learn about the truth behind Thanksgiving in order to make societal progress.

"In my opinion, I still think that when you filter all of it down, that some of those core ideas around gratitude, around learning one another's history and respecting our histories and finding out what we can do to heal from this history and make new friendships and make allyships, I think that's really important," she said.

She added, "This is our shared future and so we need to understand the past too."

Up Next in living

'Gaslighting' named 2022 Word of the Year by Merriam-Webster

Save money amid inflation with tools for coupons, cash back, reward points and more